The Frost Sessions - CD and MP3 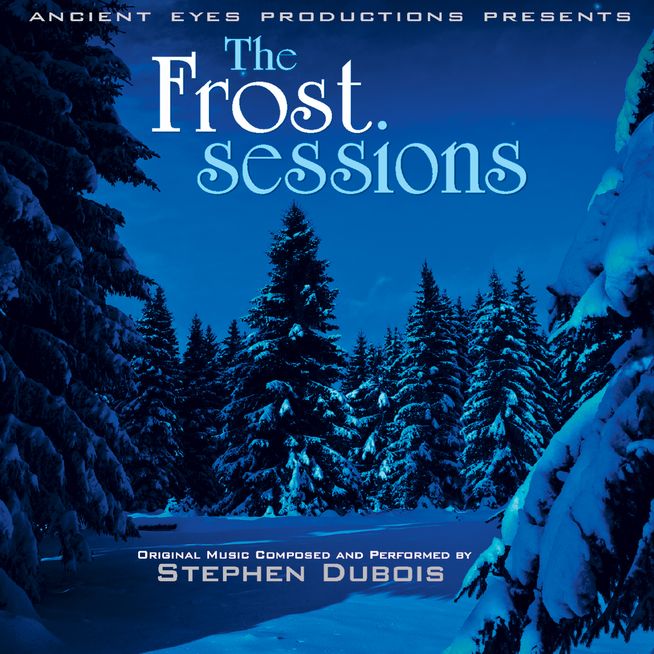 Back in the late 1980's, Paul Krupinski founded Ancient Eyes Productions in order to market an original planetarium program entitled "From Ancient Eyes to the Age of Discovery" - a production he directed at the Whitworth Ferguson Planetarium in 1988.  After the subsequent success of that show, Paul set out on marketing a second show: "Mister Frost and the Skies of Winter."  Ancient Eyes Productions invested in a lot of equipment in order to become a competitive and viable production company - this included the purchase of a state-of-the-art synthesizer/workstation and multi-track digital recording devices in 1995.  Paul brought me on to compose an original music score for the show and all those pieces are included here on this album and available for the first time in nearly 20 years.  This soundtrack has always had a special place in my heart - it was my first professional scoring job and countless hours were spent experimenting and recording.  Although I composed and played the music, Paul was present at nearly every session acting as both producer and recording technician.  Over the course of several months (and untold cups of coffee) the score was completed.  The show was marketed and sold 18 copies throughout North America along with one International sale.  It was a fun program about two children (a scholarly teenage girl, named Alison, and her video game-obsessed little brother, Michael) who meet the lively spirit of Winter, Mister Frost, while gathering firewood outside during a power outage.  After using his magic to blow away the winter clouds, the children are given a guided tour of the heavens.  By the end, Michael realizes that there are many things to see and experience beyond his myopic view of the video game world and Allison reaffirms how much fun it is to look up and discover.  Our next project was to market "Eclipse: Into the Shadow."  This was to become the show that never was.  "Eclipse" had a great script by Paul Krupinski, exceptional narration by Thomas McCray and James Orgren and a complex musical score that I was very proud of creating.  We had everything recorded, mixed and ready to visualize.  Then "it" happened.  Faster than we could have even imagined or predicted...the end was near.  Almost overnight, slide film, slides and carousel slide projectors were obsolete.  Everything went digital and the show was doomed.  We did not have the equipment or finances to do this program any other way but as a slide show kit.  So, after a year of production, the whole project was shelved.  That was 1998-1999.  So this score for "Eclipse: Into the Shadow" is included as well.  This CD contains all the music from both the Frost and Eclipse Sessions.  All titles were composed and recorded between 1995 and 1998.  I hope you enjoy this early and nostalgic collection....and, who knows, maybe some day Eclipse will be produced by a modern method and it can finally re-emerge from behind the moon. 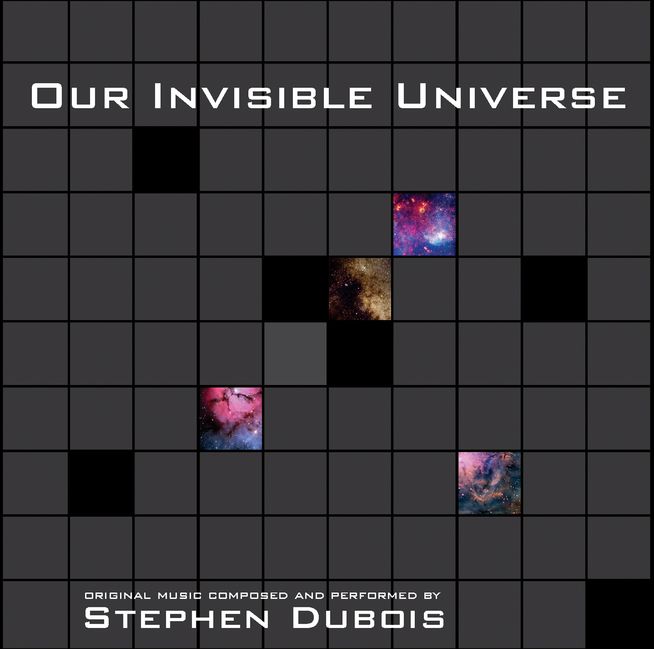 A sonic exploration of light and energy.  Take a musical journey along the electromagnetic spectrum and beyond into the mysteries of the unseen dark matter and dark energy of Our Invisible Universe.

In the Spring of 2012, the Whitworth Ferguson Planetarium, in Buffalo, NY presented an original program about the invisible frequencies of the electromagnetic spectrum, dark matter and dark energy. I wanted the music soundtrack to match the wavelengths of light discussed with an appropriate sound. Longer waves ( like Radio, Microwave and Infrared ) were represented with sustained, ethereal and breathy notes while the high frequency UV, X-Rays and Gamma Rays had abundant sequencing and arpeggios. Visible light was conveyed through the use of acoustic piano in order to sound natural like the things we see every day. Creating the "sound" of dark matter and dark energy was another story altogether. The music had to capture the unexplained and the mysterious: an intangible feeling of isolation as well as being overwhelmed and consumed. 'Our Invisible Universe' attempts to musically bring into view that which is unseen by human eyes. The album cover is a grid representation of 100 squares where only 4 are filled with images. This represents the 4% of the universe that can be "seen" by various telescopic equipment whereas the rest is the 96% of dark matter and dark energy. The physical CD has a two-tone effect with standard black and a richer black tone to divide the spaces. Since this did not translate well on screen, the squares are pictured a little lighter. 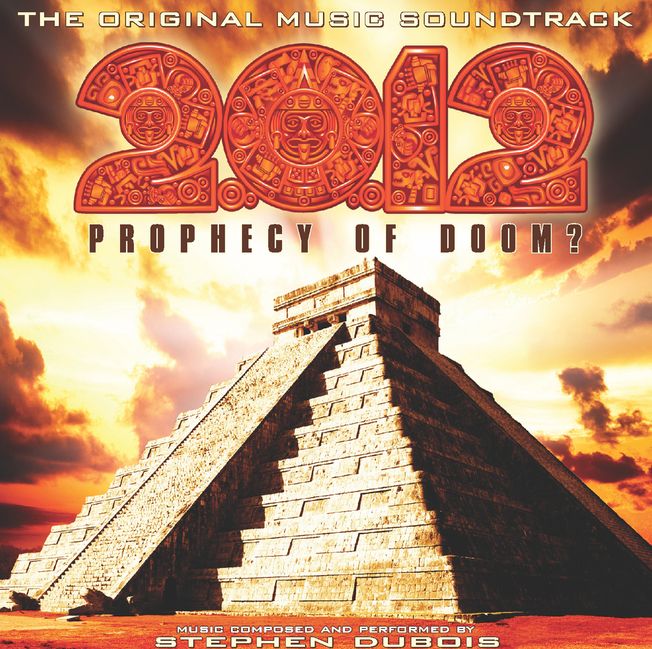 A fusion of Mayan tribal beats and Electronica, the 2012: Prophecy of Doom soundtrack explores the ancient past with a modern twist.  Originally scored for the Whitworth Ferguson Planetarium production of the same name, the CD includes additional music and a second score of original music from another program, Constellations of the Zodiac.

The Mayan music was a challenge to write because there was not any clear source.  There are people today, who are descendants of the Maya, that write and record, but to know exactly what the music sounded like (when the civilization flourished) is a mystery.  A mural discovered on the wall of a temple provided a glimpse of this, however, and was a springboard of inspiration for what would ultimately become the final score.  The mural depicted an orchestra of long horns, percussion and various drums.  In addition, there were a number of flutes.  So adding these influences to the electronics led to my take on 'Mayan Fusion.'

Brand new for 2014, this Celtic-infused, old world style meets dreamy synth in my take on a traditional classic.

From the Blue Planet to the Red Planet

This music is the soundtrack from a full-dome production created by the Travelers Science Dome Planetarium and the New Children's Museum in CT. It was a great opportunity and I was fortunate to be a part of the team. I was given a lot of creative control over the music, too. What I tried to represent, musically, was the experience of life on Mars. I wanted the music to sound cold, evoke loneliness, sonically create the turbulence of violent dust storms, whirling sequences to mimic the winds of dust devils, etc. Some tracks, such as Weightless Journey, attempted to let the listener experience the feeling of zero gravity. Challenges aside, I was pleased with the final result. The music on this album includes everything recorded for the score - including the tracks that were trimmed or cut from the final mix. There are also two bonus tracks not in the show at all, but inspired by it.

This was such a fun pair of projects! I had the great fortune to score these late in 2014. What I love about the Howard B. Owens Planetarium, located in Lanham, MD, is that it provides so many opportunities to engage the student body to contribute such things as original artwork, technical support and narration. I am hopeful to be able to work for them again and cannot wait to see what magic they create when a group of students and faculty come together to work as a team of educators - delighting audiences under the dome with their results.

These scores contain moments of mystery, suspense and wonder as characters experience all sorts of revelations in their respective stories.

Unlocking the Solar System
Imagine the future: you are living on the Moon, your parents are on an excavation to Mars, and you are… bored! Join futuristic sibling stars Clyde and Gilraen as they set off on an adventure of their own when they discover they have been locked out of data files about Pluto. Discover for yourself the importance of the New Horizons mission to Pluto! Be onboard as studies of Pluto help unlock mysteries of our solar system!

Astin's Sky Adventure
This program covers concepts related to stars, constellations and the solar system. We meet Astin, a young boy who dreams he has been transformed into a constellation. With the constellation Orion to guide him, he takes a whirlwind tour of the solar system. Astin awakens from his dream to discover a meteorite in his hand, leaving him to wonder whether it was a dream or not.